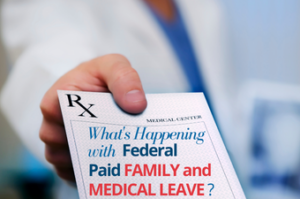 The employee benefits package you offer goes a long way in supporting fruitful recruiting and employee retention efforts. Now, more than ever, benefits like paid family and medical leave have taken on a higher level of importance. But due in part to the absence of national standards, many US employers don’t offer these benefits. According to the Bureau of Labor Statistics’ National Compensation Survey: Employee Benefits in the United States, March 2021, an estimated 23% of private-sector workers had access to paid family leave in 2021, which is up by 3% compared to 2020.

Where do things stand for federal paid federal and medical leave?

The Family and Medical Leave Act (FMLA), which was enacted nearly 30 years ago, is the most recent permanent policy reform affecting workers in the private sector. Under the FMLA, eligible employers are required to provide only unpaid leave to their employees. Since October 2020, under the Federal Employee Paid Leave Act, federal employees are guaranteed 12 weeks of paid parental leave following the birth or placement of a child. But while efforts are underway, the United States still lags behind nearly all other industrialized nations in enacting laws that guarantee paid family and medical leave for all workers.

According to the Organisation for Economic Co-operation and Development’s (OECD) Family Database, the US is the only OECD-member country that does not provide “statutory entitlement to paid leave” at the national level. And while nearly all United Nations member countries guarantee paid family leave, according to the WORLD Policy Analysis Center, the US is among the eight countries that do not.

Where are things headed for federal paid family and medical leave?

The legislative journey of the Build Back Better Act (BBA) has been anything but predictable. While there was some traction initially, the bill’s progress has slowed to a crawl. The House passed the latest iteration of the bill before the turn of the new year, but the bill’s fate remains uncertain. Congress is still working out the details ahead of enacting a new standard; however, should the latest iteration of the BBA pass in the Senate, it would provide eligible US workers with four weeks of paid family and medical leave per year beginning in 2024.

Under the BBA, most full-time, part-time, gig workers, and other self-employed workers in the private and public sector will be eligible for paid family and medical leave. Eligibility requirements would be tied to the worker’s recent work history, earnings, and would be based on a certified paid family or medical need to be away from work. The maximum amount of the weekly benefit would be capped at $814, and the amount would gradually phase out as the worker’s pay increases. An eligible worker would receive 90% of the first $290 made per week, 73% of their next $290 to $659, and 53% of additional wages between $659 and $1,192.

Workers would be able to use the time all at once or intermittently within a year if the worker has a serious health condition, needs to care for a new child, or provide care for an immediate or extended family with a serious health condition. Extended family would include grandparents, grandchildren and their spouses, siblings and their children, and others associated “by blood or affinity” as equivalent to a family relationship.

In addition to establishing this new federal program under the Social Security Administration, the legislation also includes a new “legacy state” and employer-sponsored program, under which individuals who are covered by a state plan or a comprehensive employer-sponsored program would not be eligible for federal benefits. In these cases, the federal government would reimburse those states and employers for benefits paid.

Workers who receive paid time off, including paid sick leave and paid vacation, while performing qualified caregiving activities (aside from those used during the waiting period mentioned above) would also be ineligible for the federal cash benefit. However, as long as the combined amount does not exceed the worker’s regular pay rate, an employer may provide a worker with compensation to “top up” their weekly federal benefits.

What other federal paid family and medical leave legislation remains in limbo?

The Comprehensive Paid Leave for Federal Employees Act was introduced to the House on January 28, 2021, and the House held a committee consideration and mark-up session on July 20, 2021; however, since that time, the bill has not progressed further in Congress. If passed, the Act would provide federal workers with up to 12 weeks of paid time off for their own medical condition or to care for a sick spouse, child, or parent.

The Family and Medical Insurance Leave (FAMILY) Act proposes a national insurance program funded by employee and employer payroll contributions. The FAMILY Act would provide employees up to 12 weeks of partial income in the event of a personal, serious health condition, one afflicting an immediate family member, or for the birth or placement of a child. The bill was introduced to the Senate and referred to the Committee on Finance in February of 2021; however, the bill has not made any progress since that time.

The Healthy Families Act (HFA) would require employers with 15 or more employees to provide at least one hour of earned paid sick leave to their employees for every 30 hours worked, up to an annual maximum of 56 hours. Employees could use this leave to care for a child, parent, spouse, a domestic partner, or other blood or close relatives. In April of 2021, the HFA was referred to the Committee on Health, Education, Labor, and Pensions; however, this bill has not gained further traction.

Legislation continues to push the nation closer to a standard for paid leave. Still, employers must understand and comply with existing state paid leave laws and any federal laws enacted in the future. We’re here to make your payroll and HR operations frustration-free, organized, and compliant with regulatory requirements. Contact Commonwealth today to find out how we can help you navigate paid family leave laws at every level.